Welcome to our Spring 2015 Edition and 53rd Claim Solutions’ Newsletter.

You would be forgiven for not recognising Spring this year. It started and seems to have hibernated back in Winter. News headlines in the last 3 weeks have warned of flash flooding, tornados, funnel clouds and even a gustnado (yes, really)….and that was for Melbourne. Meanwhile international headlines have screamed ‘Global Weirding’, “Hottest month in 4,000 years”, ‘Hell freezes over’ and ‘Atlantic jet stream to blast UK with Severe gales & rain till Christmas’. The climate change debate is at the forefront of daily news feeds and so is new terminology and conditions.

If you, or your clients, have suffered loss or damage we wish you a speedy recovery. If you need a claims’ preparing superhero for any event we are available to assist you. We welcome your enquiries.

All our newsletters over the past 15 years have been indexed to provide you with an online compendium of our claims experience. Browse our Index here to find articles which interest you.

Is it a Storm? Is it a Tornado? 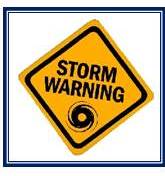 “Up in the sky, look: It’s a bird. It’s a plane.” No, it’s only a gustnado!  On 5 November, The Bureau of Meteorology (BOM) issued stern warnings of potential flash flooding with “large hailstones and tornadoes likely”.  The Associated Press (AAP) reported “Funnel clouds, which may turn into a tornado, have been reported over Melbourne Airport, Craigieburn and St Albans although the airport says it is business as usual for now.” Rest assured though the BOM radar was tracking the storm and they tweeted frequent radar stills with big red explanatory directional arrows. However, it was all called off and later news reports suggested the wild weather was caused by a complex low pressure system that swept from Western Australia all the way to the east coast and Melbournites had experienced a ‘gustnado’.

Murrayville in the Mallee recorded the wettest November day on record where 82 millimetres fell in an hour and the same weather system hit parts of South Australia, cutting power to hundreds. The detail of the real damage, however, was lost in the headline that there was a ‘gustnado’ in Melbourne.  Not unlike that other Hollywood classic, Sharknado, it had us reaching for the dictionary, a policy wording and scratching our heads.  Apparently a tornado is only declared once the funnel cloud actually touches the ground and a gustnado is a ‘short-lived, ground-based swirling wind that can form on the leading edge of a severe thunderstorm’.  Hmmm, either way it moved through almost faster than the speed of lightning and the tornado warning was cancelled!

As for the policy response would you know if you or your clients are adequately covered for all such events?

When is a Storm not a Storm? 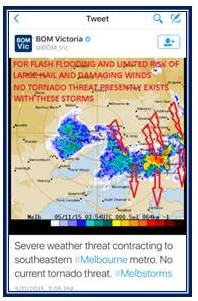 Whether you’re a Wizard of Oz or a Twister fan, tornados have held an aura of mystery exalted from the fear of the uncontrollable along with the destructive path they leave.

When is a storm, not a storm? Possibly when it’s a storm surge, flash flood, funnel cloud, tornado, flood, hail, gustnado, hurricane, ice flood, shelf cloud and the list goes on.

The Insurance Council of Australia note that the coastal risks of storm surge, coastal erosion and gradual sea level rise are excluded by many general insurance policies in Australia.

An Industrial Special Risks (ISR) policy covers all risks unless they are specifically excluded so let’s review the Exclusions. Perils Exclusion 3 does not cover losses under Section 1, Material Damage or Section 2, Consequential Loss where there is “physical loss, destruction or damage occasioned by or happening through:
(a) flood, which shall mean the inundation of normally dry land by water overflowing from the normal confines of any natural watercourse or lake (whether or not altered or modified), reservoir, canal or dam ,
(b) water from or action by the sea, tidal wave or high water.”

It is also worthy of noting that Property Exclusion 6 does not cover “physical loss, destruction of or damage to bridges, canals, roadways and tunnels, railway tracks (other than on the premises occupied or used by the Insured), dams and reservoirs (other than tanks) and their contents.”

You might also like to consider that Property Exclusion 13(b) does not extend cover to “property in the open air unless such property comprises or forms part of a permanent structure designed to function without the protection of the walls or roof; caused by wind, rainwater or hail.”

Unless the policy wording is endorsed for flood, the base Industrial Special Risks (ISR) wording excludes cover for flood, actions of the sea, tidal wave or “high water”. Further, any property in the open air, as noted, above, is not covered for wind, rainwater or hail damage.

The cover for ‘Wind and Water’ generally excludes loss or damage by “sea, tidal wave, high water, flood, erosion, subsidence, landslide, mudslide or settling”. Flood remains excluded in most policies unless endorsed otherwise and generally contains the same or similar definition to that in the Industrial Special Risks (ISR) as above.

We have noticed many Product Disclosure Statements for Business Pack polices, and also Home and Contents insurance, have progressively issued changes to their definitions of Storm and Flood and have separately identified perils called ‘Rainwater Run-Off’ and ‘Storm Surge’. These newly defined perils appear to be covered and we wonder at the need to differentiate. For instance a definition of Rainwater Run-off is “rainwater that flows over normally dry ground due to excessive rainfall” and includes landslide or subsidence as a direct result of rainwater. It specifically excludes “action of the sea”. Storm surge has been defined as “an increase in sea level that occurs because of an intense storm or cyclone” and is covered except that it also specifically excludes “actions of the sea”.

Almost a tongue twisting tornado of covers and exclusions. Is there really any more or less cover than existed previously or will these perils be specifically excluded at some time in the future?

We suggest you review your policies carefully for what is, or rather isn’t, covered.

America’s National Oceanic and Atmospheric Administration (NOAA), NASA and Japan’s Meteorological Agency found that July 2015 was the hottest month on record for global temperatures “and perhaps the hottest in 4,000 years.” (NOAA started keeping records in 1880.)

According to scientists prolonged droughts, hotter heatwaves and worse bushfires are a result of this. Australia understands these events only too well. Our south eastern states experienced a Winter above normal daily average temperatures and according to news.com.au five out of eight Australian capital cities were actually warmer than normal in July.

Turning to the rest of the world, for the first time in 165 years San Francisco was rain free in January, Boston suffered through the big freeze in February, California is in its 4th year of drought and continually setting record high temperatures. Then on 3 November a massive hailstorm in Saudi Arabia turned a normally dry desert into an icy river killing 19 people when it was estimated that eight years’ rain fell in just two days.

There are many articles discussing the jet stream buckling or warping blaming it for these extreme weather patterns. What has become very apparent is that this is not a new discussion. A headline from 2010 screamed “Frozen jet stream links Pakistan floods, Russian fires”.
They are sensational headlines that are required to capture a time poor audience scanning online news headlines.

Looking to experience we know Australia has seen its share of disasters in the last year starting with the Brisbane hailstorms on 27 November 2014, then the South Australian bushfire in January, Cyclone Marcia on 20 February, and the storms and hailstorms that racked the north eastern seaboard in NSW and Queensland in April and May. However, these are not the largest losses (in dollar terms) that Australia has experienced.

The 10 largest natural disaster catastrophes in Australia according to the Insurance Council of Australia (based on 2011 adjusted values) are:

Let’s hope there are no additions to the list in the near future. 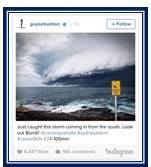 A very impressive shelf cloud that swept across Bondi Beach, NSW, on Friday 6 November had every one from Guy Sebastian tweeting and instagramming photos!

Shelf clouds are low horizontal cloud formations that usually occur at the leading edge of a storm. The images captured were extraordinary and it looked like a giant wave was going to hit the shore. Our research led us to understand that as beautiful as it was, such cloud formations may indicate dangerous weather conditions including strong winds, heavy rainfall or hail, and lightning approaching.

“In the endless reaches of the universe, there once existed a planet known as Krypton, … There, civilization was far advanced and it brought forth a race of "supermen" whose mental and physical powers were developed to the absolute peak of human perfection. But there came a day when giant quakes threatened to destroy Krypton forever.”[Prologue to Superman 1941 movie]

Overwhelmingly floods, storms and cyclones represent the major losses in Australia. History indicates that such losses result in extraordinary physical damage and loss of life.

Some facts from Historical analysis of natural hazard building losses and fatalities for Queensland 1900-2011 prepared by Risk Frontiers October 2012.

Understanding history and such risks will provide a base for managing these risks.

While it is evident that a gustnado will not be our kryptonite, the wonders of nature will always amaze us. When we can’t control it, we work within our environment and manage the risks. By the way, I hope you ducked for the flying space debris this month. 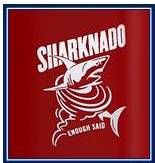 In the (we honestly hope) unlikely event that sharks fly through the air with determined destruction as a result of “a Category 7 Hurricane spawn[ing] Heavy rain, winds, storm surges, & deadly Sharknadoes” (IMDB synopsis Sharknado 2) we could almost assure you that your business policy would cover the event.

However, while reviewing a Business Pack Policy wording recently it came to our attention that the Memoranda to Section 2 Extension of Cover for ‘Infection Disease Murder and Closure’ extended cover “to include loss resulting from interruption of or interference with Your Business due to closure or evacuation … of the Premises during the Period of Insurance by order of a competent government, public or statutory authority as a result of: ….
(e) shark or crocodile attack occurring within a 20-kilometre radius of Your Premises ... ”

We think there must be a Sharknado fan working in underwriting.

We trust this provides some comfort to you when you are watching Sharknado 4 due out next year.

Claim Solutions provides a specialist insurance claims service. Our firm is recognised as one of the leading practices in this field with both national and international companies featuring amongst our clients. Our aim is to provide an efficient, professional and complete claims service which responds to your needs in times of crisis. We are available to assist you and your clients.